I love snow, so this announcement brings me a sense of joy and excitement! As a child living on the plains of Colorado it meant freedom from a day of school and a chance to play outside with my sister and neighborhood friends until I turned blue. After sledding, snowball fights, and shoveling, my mom always had hot chocolate waiting.

As an adult living on the plains of Wyoming it means a day (or more) off work. Snow days don’t quite garner the same sense of joy as they did when I was young, but the white blanket over the neighborhood instills joy over the beauty surrounding me. The world becomes hushed and still while the birds take over and dispense of the quiet.

I’ve experienced so many blizzards in my life that I’ve lost count, but a few stick in my memory like the one when I was a kid visiting relatives in Lawrence, Kansas. We got to go sledding on the campus of KU, where we had to bail out of the plastic toboggan at the base of the hill lest we slide into Potter Lake. It was a great time with my cousins, and one inadvertently kicked me in the head while bailing out. (I survived!)

There was the blizzard in 1987 when my husband and I lived in Virginia. He had gone to the base for work, but was really late getting home. I was worried sick, but when he returned I learned that he had stopped many times on his way to help people stuck along the road, as was a fitting thing to do for a young USMC 2nd Lieutenant!

Then there was the one in 1988 in the Florida panhandle—well, it wasn’t really a blizzard to me (less than an inch fell), but to my coworkers who didn’t know how to drive in snow it was. When they asked how to drive safely on the slick roads, I cautioned them to not tailgate other cars as was the tendency of drivers there.

The 1989 Christmas Eve blizzard in Havelock, North Carolina dropped 18″ on our town near the coast. A place in the South that is prepared for hurricanes is not prepared for snow at all, let alone 5′ drifts. My southern dogs weren’t quite sure what to do with the stuff, and Louie (big black lab) sunk in a drift and struggled to get out.

We returned to Virginia in 1992 only to experience another blizzard. Louie knew what to do in snow this time and had a blast running around the neighborhood. Michaela was 4 then and had fun sledding with her bestie Erin, a California girl.

Not long after moving back to Colorado we had the deepest snow I’ve experienced and lost power for 3 days in October 1995. Around 3′ of snow fell! This time Louie couldn’t get out the back door without us digging him a path, and it got so cold in our old house that Michaela’s fish froze (RIP Skylark).

Michaela and I took a trip to New York City in December 2009 only to experience a blizzard there. Manhattan didn’t really shut down since the subway still ran, and businesses cleared the sidewalks pretty quickly. It was lovely to see the city covered in snow with Christmas lights twinkling! And I have to say, no one does a snow day like New Yorkers in Central Park! It was a party! 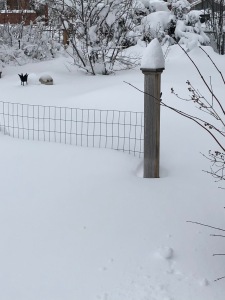 Blizzards are pretty common here in Cheyenne so we tend to be prepared. We own an all-wheel drive car and  a snowblower; the city has snowplows that come out in force, and shoveling is simply winter weightlifting (that wears me out faster than it used to). Our dog Bella loves the snow—she’ll bury her head in it then let the wind blow her ears. (She was born near Rocky Mountain National Park, so it makes sense!) We’ve had many snow days in our 19 years of living here, but this storm was a record-breaker (31″) and we’ve had three snow days in a row. We’re still digging out and anticipate it will take a few more days before the streets are clear.

After living in tornado alley while in college and hurricane country (escaping two) while my husband was in the Marine Corps, I will take blizzards in the West any day, even when the accompanying winds blow my stainless steel garden gazing ball off its stand!

I am grateful, and acknowledge that I am very fortunate, to have had and continue to have the resources to weather blizzards and other storms in life.