On the mid-September road trip I took with my daughter, Michaela, we visited Robert Smithson’s Amarillo Ramp. Like many remote land art installations, seeing it in person presents a challenge. This one requires more determined planning than Smithson’s Spiral Jetty and Nancy Holt’s Sun Tunnels that I visited a couple of years ago, because it is located on a private ranch. I had to submit a request to visit the site.

Bradley was very friendly and an excellent guide, relaying history and stories about the area and the people from around the world he has taken to Amarillo Ramp over 20-some years. He knows the route so well that nothing distracts him from the story he is telling, not even hopping out of the 4WD pickup to open gates.

It was easy to spot the site when we arrived at the natural overlook. Smithson originally staked it out in an irrigation water retention lake, but the water is long gone, as is the dry, cracked soil left in the absence of water. Now the site is located in a lake of prairie grasses, yucca, mesquite and cholla. Entropy has ensued, and time has eroded Amarillo Ramp, quite noticeably in comparison to photos from 1973, and the top is much narrower than when it was constructed. (There are varying views on whether or not Smithson intended for the site to erode back into the earth, but most scholars I’ve read indicate that was not his intent and that he would’ve wanted it to be restored regularly. A dedicated art professor from West Texas A&M tackles vegetation in an attempt to keep it from overtaking the ramp — thank you!)

As we made our way down the path from the overlook, Bradley motioned to our left and pointed out that we were just a few yards from where Smithson died in a plane crash while examining the staked-out site, along with the pilot and a photographer. (Nancy Holt directed the construction of her husband’s final piece, having worked through the design of it with him.) Being there gave me an eerie feeling, but also one of connection. I was reminded of my experiences with ancient petroglyphs — art connects human beings throughout time in a non-linear manner, no matter when in measured time the artist(s) and I existed. 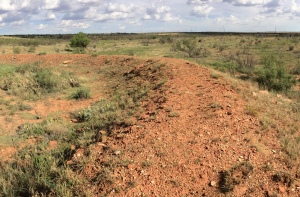 We walked the length of the ramp and back, and while it brought back memories of walking Spiral Jetty, I pondered how different the two are. Amarillo Ramp didn’t evoke the same meditative experience, and I didn’t have to pay careful attention to where I placed each step on jagged rocks. I wondered what it would’ve been like had the lake retained water, and I thought of earthen boat ramps at lakes I experienced as a kid. (Did Smithson have those in mind when he designed the piece?) But instead of descending into the lake as a boat ramp would, the ramp ascends into the sky overlooking the vast landscape, more like a ramp from which to take flight. That makes me wonder if Smithson’s sci-fi interests and/or drawings for land art at an airport influenced this piece.

I don’t think for a moment I’ll ever find answers to some of my questions, even though I will continue to search. They probably went with Smithson when the plane crashed. And I don’t think that artists are obligated to provide answers to every question that viewers will have. Each one of us brings our own references and history to a piece, and therefore our own degree of interpretation. (In my own work, others see things I don’t and didn’t intend. I’m okay with that, unless my stated intentions and vision are ignored.)

I would like to return to Amarillo Ramp someday and spend a few hours there, listening to and feeling the winds, experiencing the changing light and sky, being a part of the site, transcending time.