It’s pretty exciting as a visual artist to see one’s name in vinyl print on a wall – especially when it is the only name! Exhibiting solo at Artworks Loveland had been a goal of mine for a few years, so when I received an email a few months ago inviting me to do so, I jumped at the chance.

The Artworks staff (Sarah, Executive Director, and Janniffer, Gallery Assistant) were so responsive and helpful as we planned, prepared, and implemented the exhibit. I couldn’t have asked for better people to work with, and the artists who rent studio space at Artworks welcomed me into their community.

Six projected images rotate on loops of three on two projectors, and 5″ x 7″ images printed on 8.5″ x 11″ photo paper hang by magnets around the perimeter of the gallery. Like the installations themselves, the exhibit is ephemeral. (see photos below)

Around 80 people attended the opening event, and the Loveland Reporter-Herald ran a story about the exhibit! Then 30 people (I saw some of the same faces that I saw at the opening) attended the “Conversation with the Artist” event. As one who doesn’t relish getting up in front of a crowd, I enjoyed the conversation since it was not just me giving a lecture. It was me hanging out with a bunch of artists and art-lovers talking about our favorite subject! I am honored to have so many people come out to see my work and engage in art, and a few friends made the trek from Wyoming to both events.

None of it would’ve happened without my friend Jennie, who recommended my work for an exhibit at Artworks where she is one of the studio artists, and then invited me to work on the land where she and her husband Andrew make their home. I love the picture of the two of them discussing the projected image! 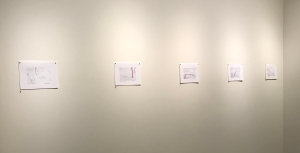